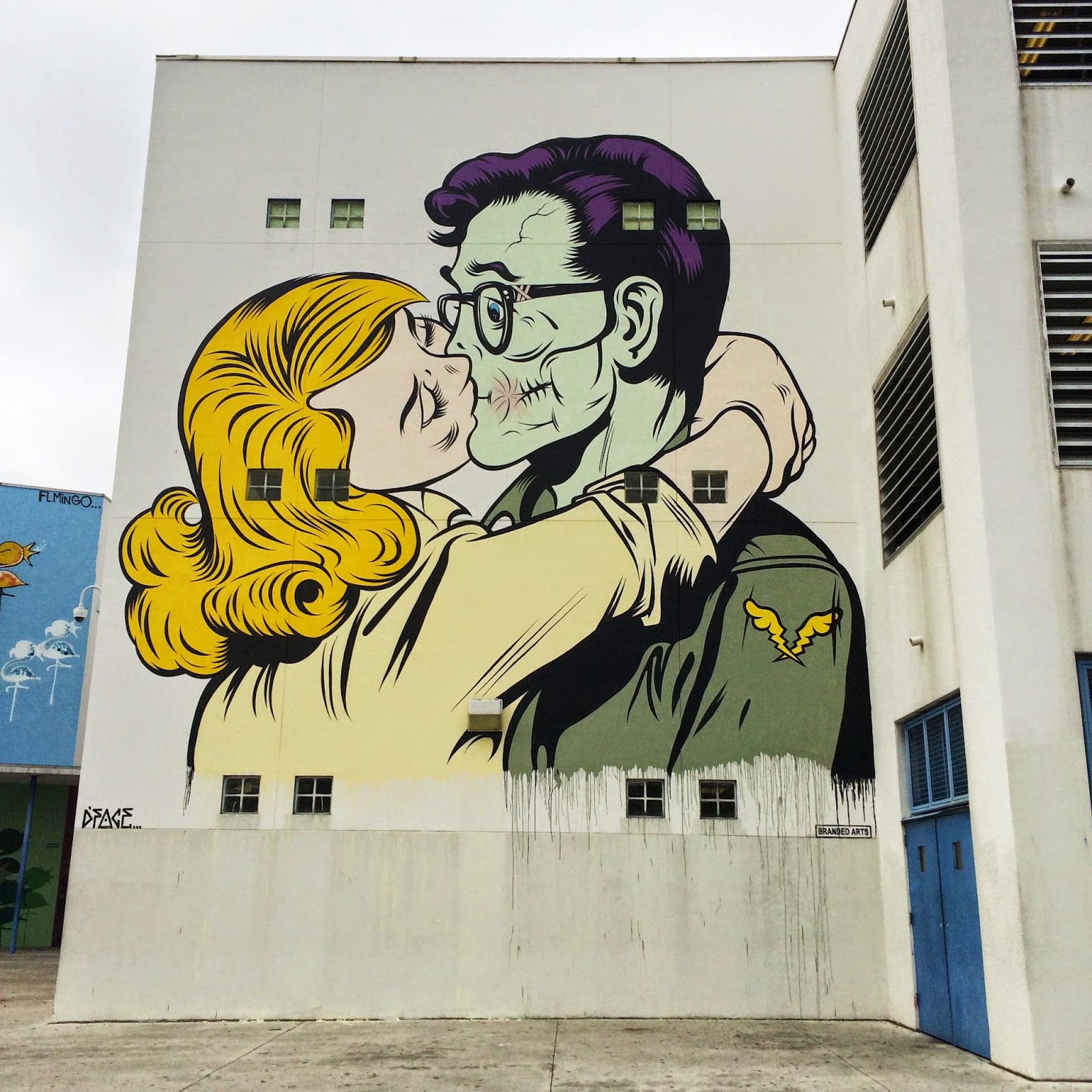 D*Face is one of the most prolific contemporary urban artists of his generation. Working with a variety of mediums and techniques, he uses a family of dysfunctional characters to satirise and hold to ransom all that falls into their grasp – a welcome jolt of subversion in today’s media-saturated environment.

His aim is to encourage the public not just to ‘see’, but to look at what surrounds them and their lives, reflecting our increasingly bizarre fascination for with celebrity, fame, consumerism and materialism, re-thinking, reworking and subverting imagery drawn from a refuge of decades of materialistic consumption, imagery appropriated from currency, advertising, comic books, these now iconic motifs, cultural figures and genres are subverted to comment upon our conspicuous society.
His work can be seen across a variety of different media applying his playful, tongue-in-cheek imagery with anti establishment values, he was also one of fifty artists commissioned to create a 50th anniversary Penguin book cover and is the only urban artist to date to be featured on the front cover of the fine art publication Art Review. His sell out solo shows ‘Death & Glory’, ‘EyeCons’, ‘aPOPcalypse now’, ‘All your Dreams Belong to Us’ along with last years Los Angeles show ‘Going Nowhere Fast’, which included his largest mural to date, and ‘Burn Brighter’ his debu Australian show have firmly founded D*Face’s presence within the global contemporary art market whilst retaining his notoriety. His work regularly sells at Christies, Sotherbys and Bonhams auction houses and yet he still continues to put his work illegally into the public domain, and as such has extensively traveled the world showing and disseminating his artwork.
In 2005 D*Face set up the gallery ‘StolenSpace’, which continues to be Londons foremost contemporary urban art gallery. In 2010 he created the artwork for Christina Aguilera’s number one selling album ‘Bionic’, Christina has been a long time collector of D*Face’s work.  2011 marked a busy year for D*Face, between his two solo exhibitions in Los Angeles and Melbourne he found time to make a return visit to the Ridiculous Pool in San Bernardino, where he debuted a unique technique combining his love of skateboarding with live painting. The event was filmed and has since been featured on websites and TV shows around the globe, to date it has received 880,691 independent views on youtube, a figure that keeps climbing, seemingly along side D’s restless ambitions and popularity.
D*Face is one of Britain’s leading “newbrow” artists, and damn if he isn’t as sharp and clever – if not quite as surreptitious – as Banksy (and sharper and cleverer by half than Damien Hirst.) – Peter Frank.
ABOUT WORD TO MOTHER

London-based artist Word To Mother was born and raised in an English seaside town. After attending art school for illustration, and with a background in graffiti, Word To Mother entered into the art world.

Word To Mother creates work that combines many influences into uniquely layered paintings, often atop pieces of salvaged wood. Incorporating hand drawn personal sentiments, emotions and feelings that he executes in the form of loose script, inspired from his experience as a tattoo artist and tight sign written letters, drawn from years of painting graffiti.

Suggestions of nostalgic sign writing and unmistakable WTM figures feature within a salvaged environment where they appear to have existed for years. A beautiful juxtaposition, of fragile and emotive elements shown through subtle textures and washes of colour, but with a strength and confidence fused with his signature patterns, architecture & figures. His work is melancholic yet fun and playful. With an earthy ‘London’ palette of grey tones accentuating splashes of brighter ‘seaside’ colours of fluro red, pink, yellows and turquoise which give the paintings an optimistic feel.

ABOUT SO YOUN LEE

Korean artist So Youn Lee’s effeminate yet ambiguous young subjects are figments of her imagination that evoke feelings of nostalgia. Her otherworldly characters are the result of a traditional upbringing and natural curiosity that led her to pursue a career in the United States. Lee received her education from Art Center College of Design in Pasadena in 2012, but her creative growth began as a child. She draws from her own life, carving it out of the canvas until an image eventually reveals itself. She works in a wide range of media, from delicate pen and ink drawings to candy colored paintings alive with psychedelic motifs. Lee describes her drawings as “Mochi”, and acrylic and oil works as “Mango”, referring to the color inspiration of her ethereal palette. She combines familiar, playful objects like childhood toys and tropical fruits together to create a personal religious allegory. Raised Buddhist with Christian practice, Lee values self-exploration and combined experience to pave your path in this world, into the next. She calls this world Cute-Surrealism, influenced by the various animation and comic artists including Hayao Miyazaki and Osamu Tezuka, and contemporary artists like Yoshitomo Nara and Cy Twombly. Coincidentally, the graphics of the Minhwa folk art she once admired perfectly match their modern works. Lee currently lives and works out of her studio in Los Angeles, where she feels closer to her cultural roots than ever before. By exhibiting internationally across the United States, Europe and Asia, she has gained prominence as one of art’s exciting new voices.

Jose de Diego Middle School serves to develop and nurture the whole student; intellectually, socially, and emotionally in a safe and positive learning environment. Faculty and staff provides challenging instruction to ensure all students are provided with excellent educational opportunities that actively engages students in their own learning.

Jose de Diego Middle School fosters a culture of achievement and social awareness among its students, faculty, staff, and community members. Through high expectations, outstanding student centered instruction, rigorous curricula, and a positive learning environment, JDD Jaguars will be equipped with a stronger foundation to become college and career ready.