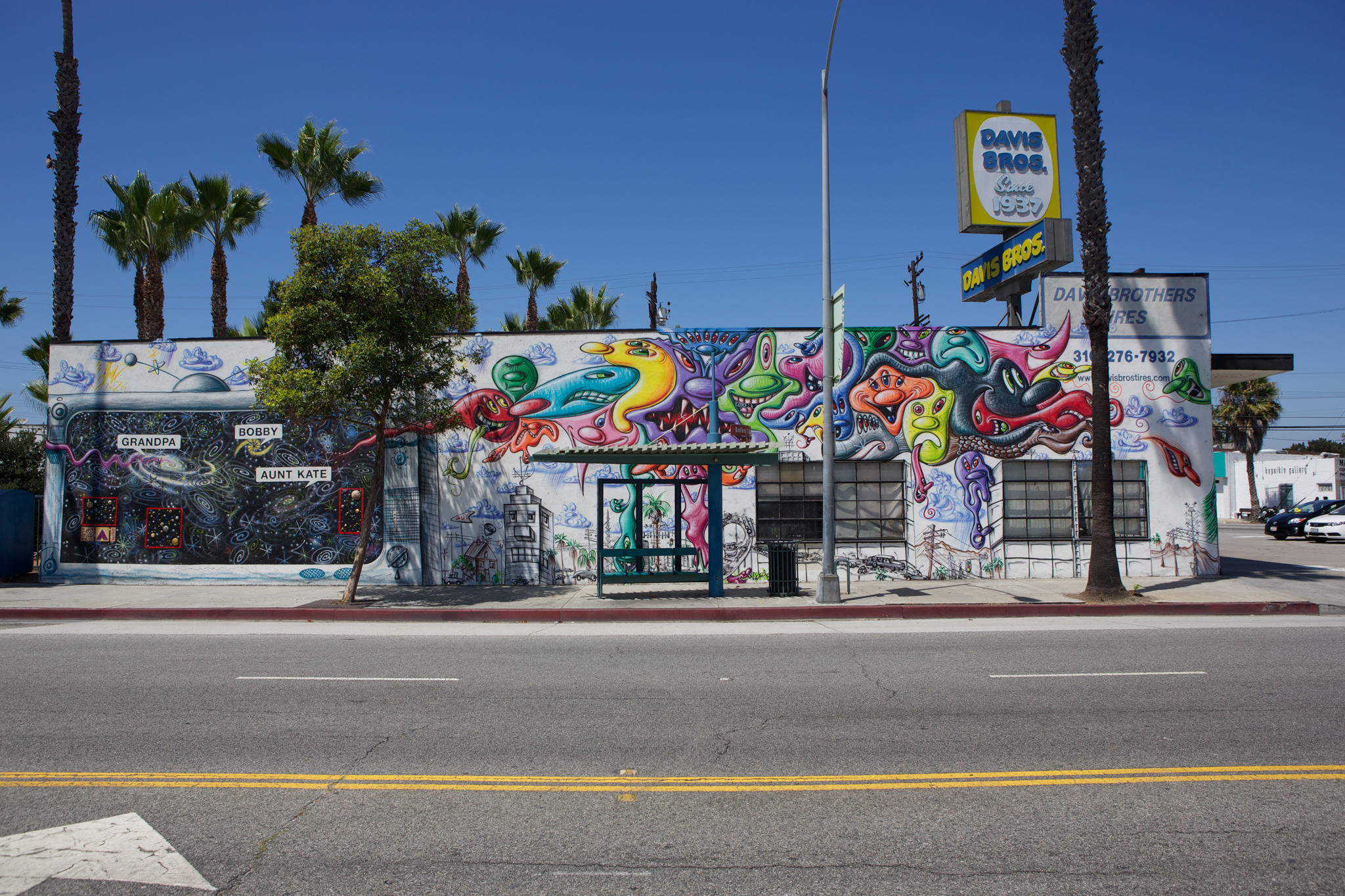 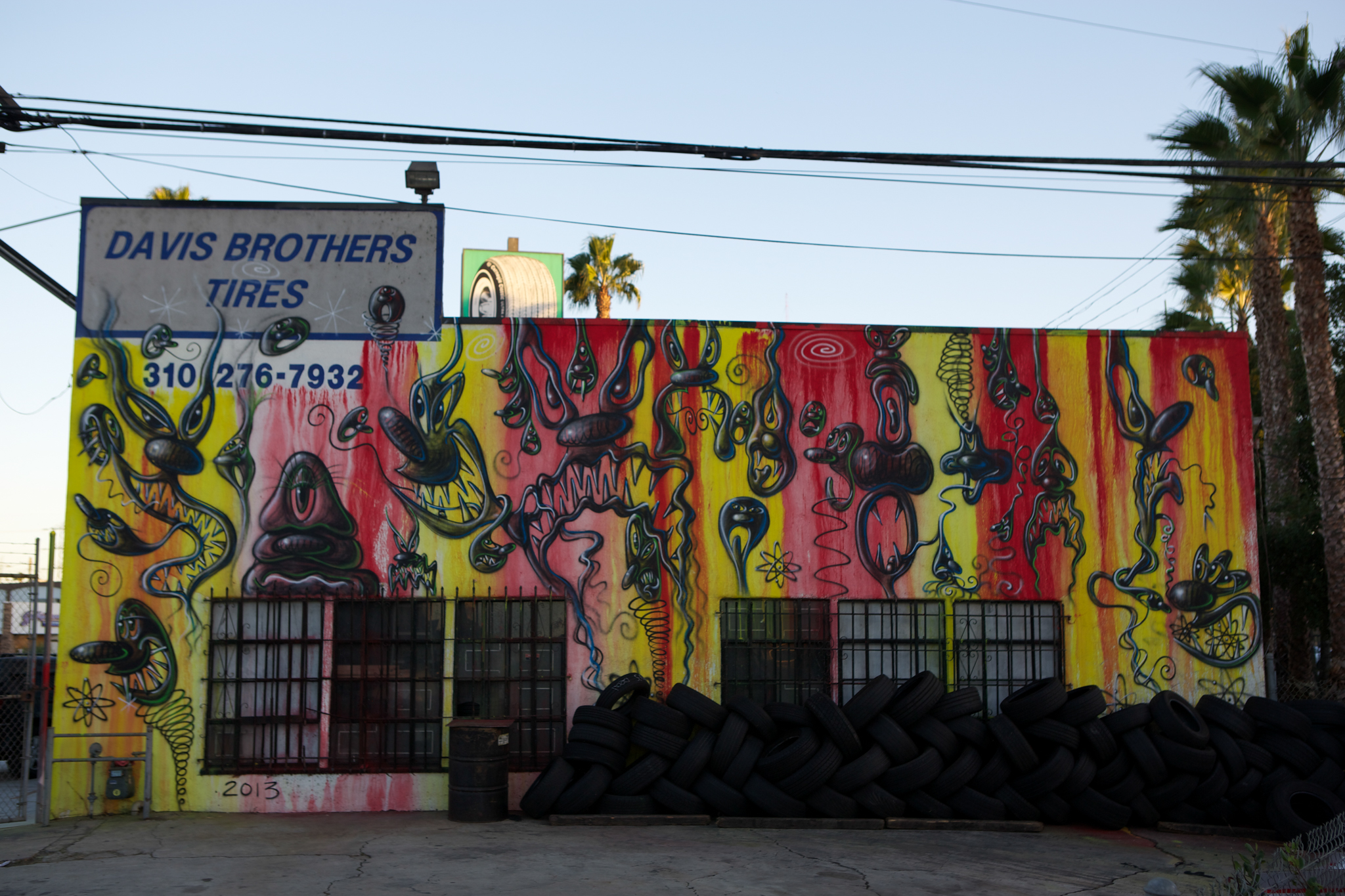 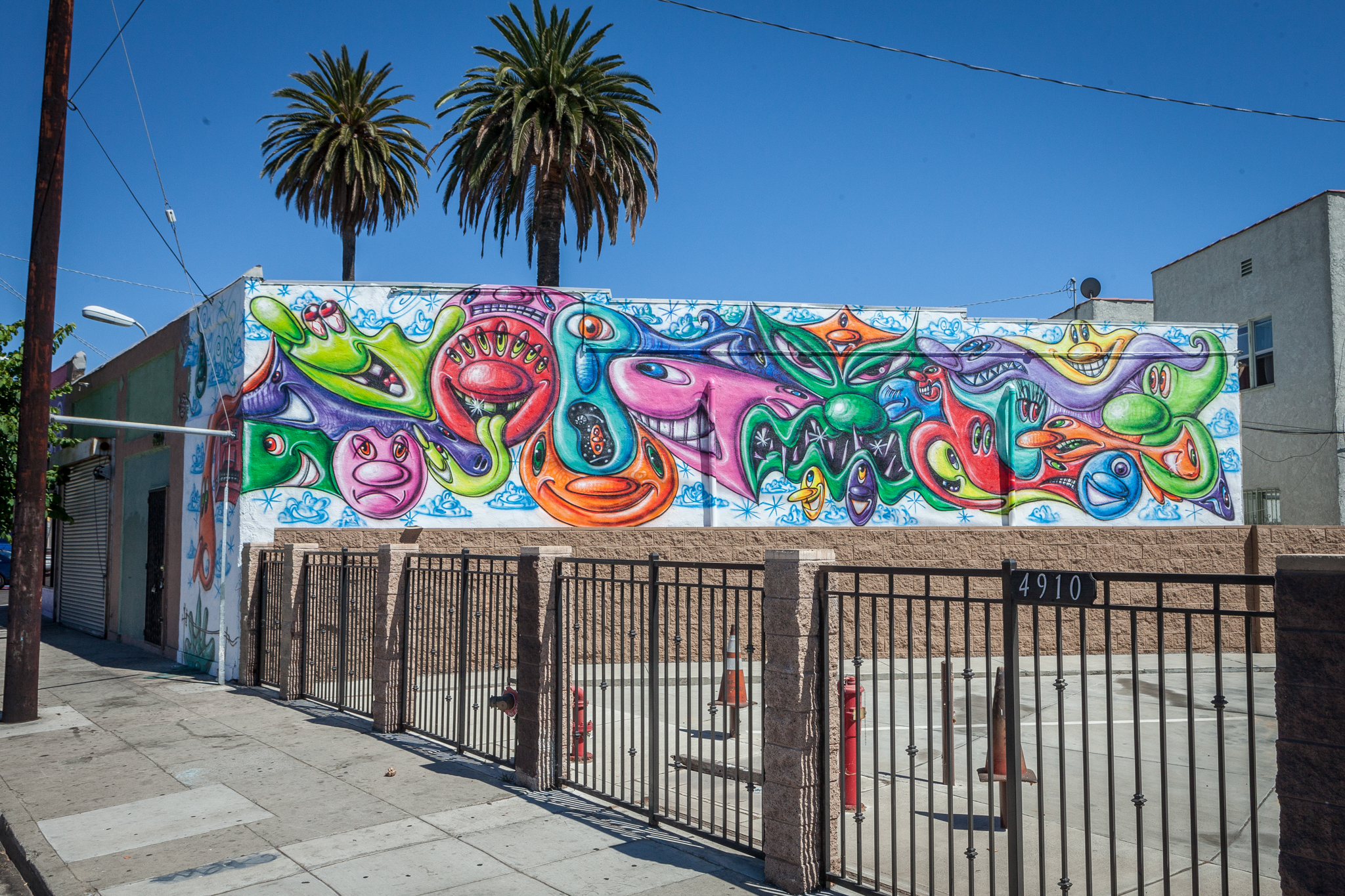 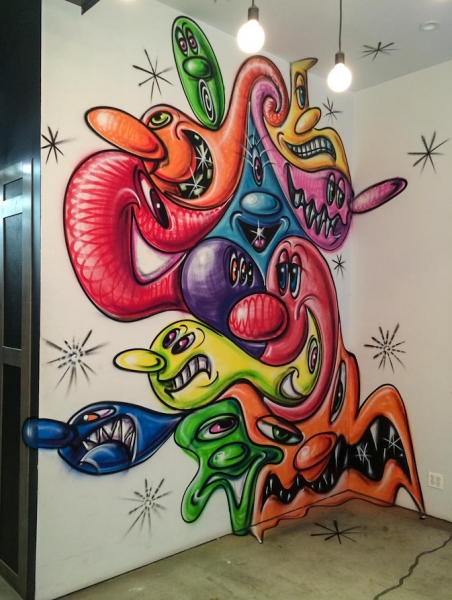 Kenny Scharf (born in 1958, in Hollywood, Los Angeles, California) is an American painter who lives in Brooklyn, New York. The artist received his B.F.A in 1980 with a major in painting at the School of Visual Arts located in New York City. Scharf’s works consist of popular culture-based shows with made up science-related backgrounds. Scharf came to prominence in the 80s interdisciplinary art scene making sparkly, pop-ed and monstrous paintings and installations. Scharf uses images from the animated cartoons popular during his childhood, such as The Flintstones and The Jetsons. In 2002, he released a cartoon of his own, “The Groovenians”, and the show was originally supposed to air on Cartoon Network but it never got picked up.
Scharf was a key figure in the East Village, Manhattan art scene of the 1980s, with shows at Fun gallery (1981) and Tony Shafrazi (1984), before seeing his work embraced by museums, such as the Whitney, which selected him for the 1985 Whitney Biennial. He did the album covers of The B-52′s in the mid-80s. In 1995, Scharf designed a room at the Tunnel nightclub in New York. Scharf was friends and former roommates with graffiti artist Keith Haring and appears in the documentary “The Universe of Keith Haring”. In 2004, he appeared in The Nomi Song, a documentary about his friend, opera singer and new wave star Klaus Nomi.
With Keith Haring he created the first of his blacklight disco installations, called “cosmic closet” in the closet of their Times Square apartment. That project has grown and morphed into its most recent incarnation, “Cosmic Cavern,” with Scott Ewalt in Kenny’s Brooklyn building’s basement where he held amazing parties in 2009 & 2010. Kenny and Dearraindrop spotted each other across a crowded Deitch Art Parade in 2005 and have been collaborating through the mail ever since. They share a love of cartoons, thrift stores and street junk, underground comics and graffiti, customized clothing, technical painting, collaging and hot glue gunning. Scharf created the cover art for The B-52′s fourth studio album, Bouncing off the Satellites. In 2010, Kenny Scharf collaborated with Joe Grillo and Laura Grant of Dearraindrop an artist collective from Virginia Beach for a show at The Hole NYC curated by Kathy Grayson. Scharf has had featured exhibits at the Monterrey Museum of Contemporary Art, Miami Center for the Fine Arts, and The Queens Museum of Art. Scharf is represented by Honor Fraser Gallery, as well as New York City’s Paul Kasmin Gallery which also shows Andy Warhol, Frank Stella, David Hockney, Morris Louis, Al Held, and others. In 2012, Artist Kenny Scharf created a Pop Art mural in Salem, Massachusetts.