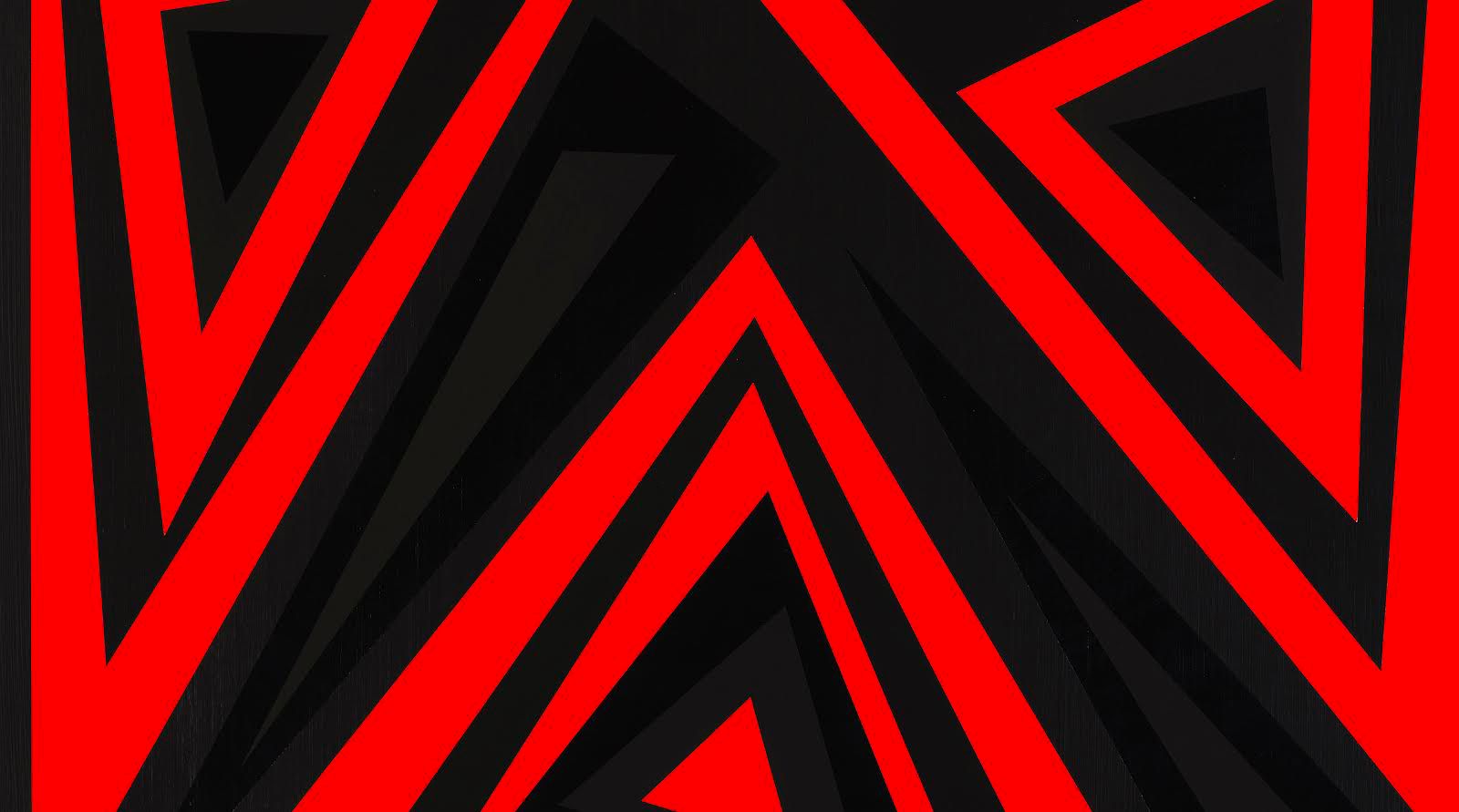 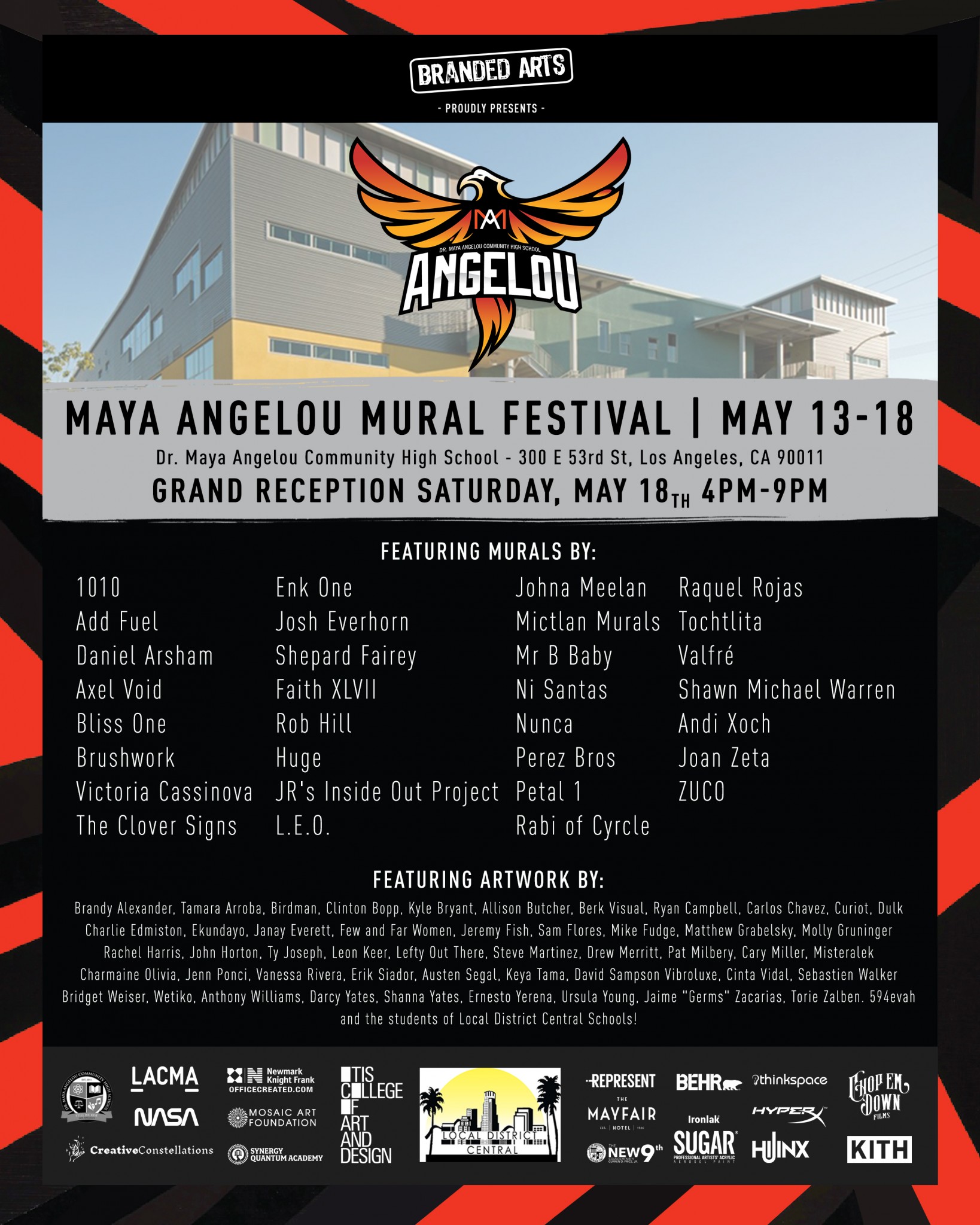 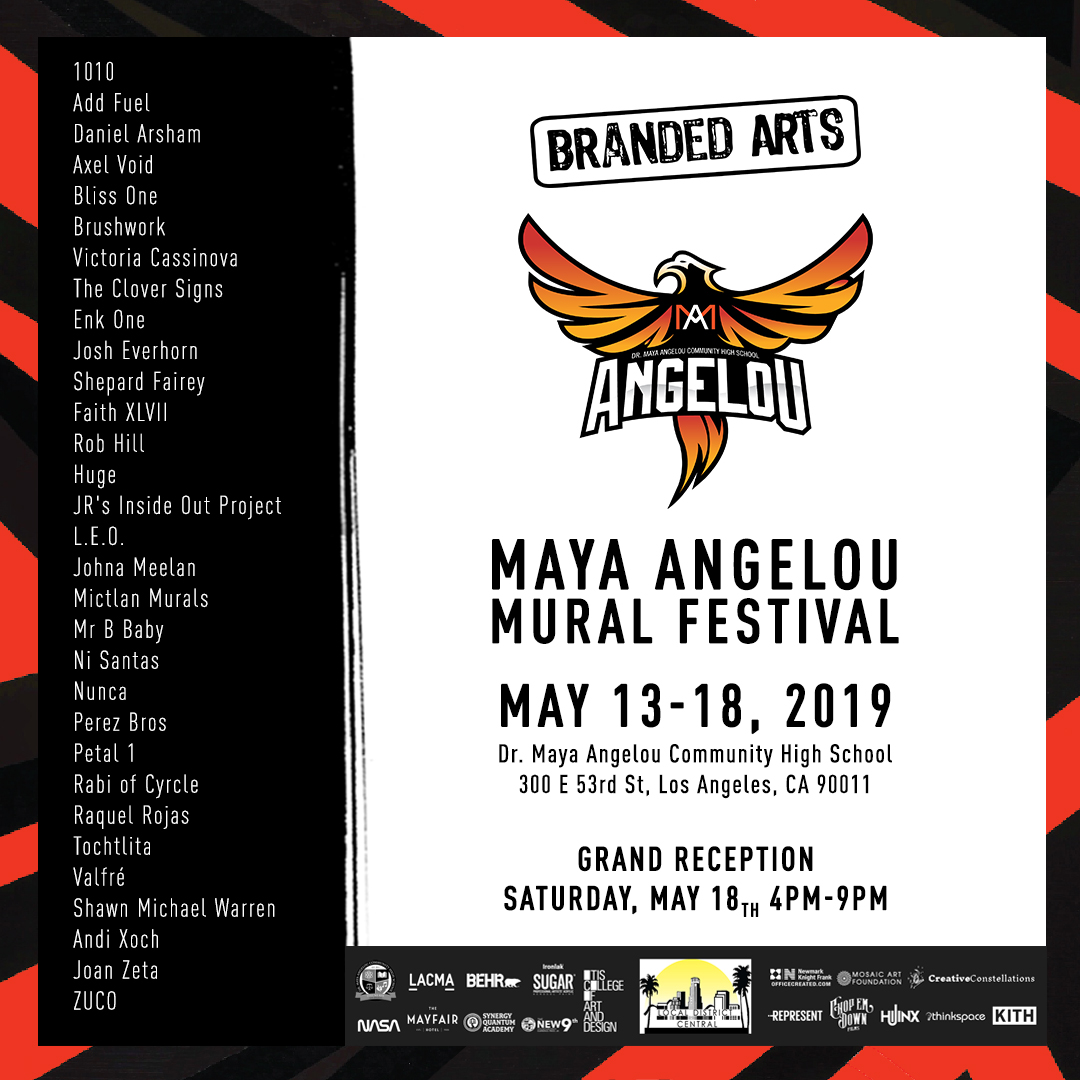 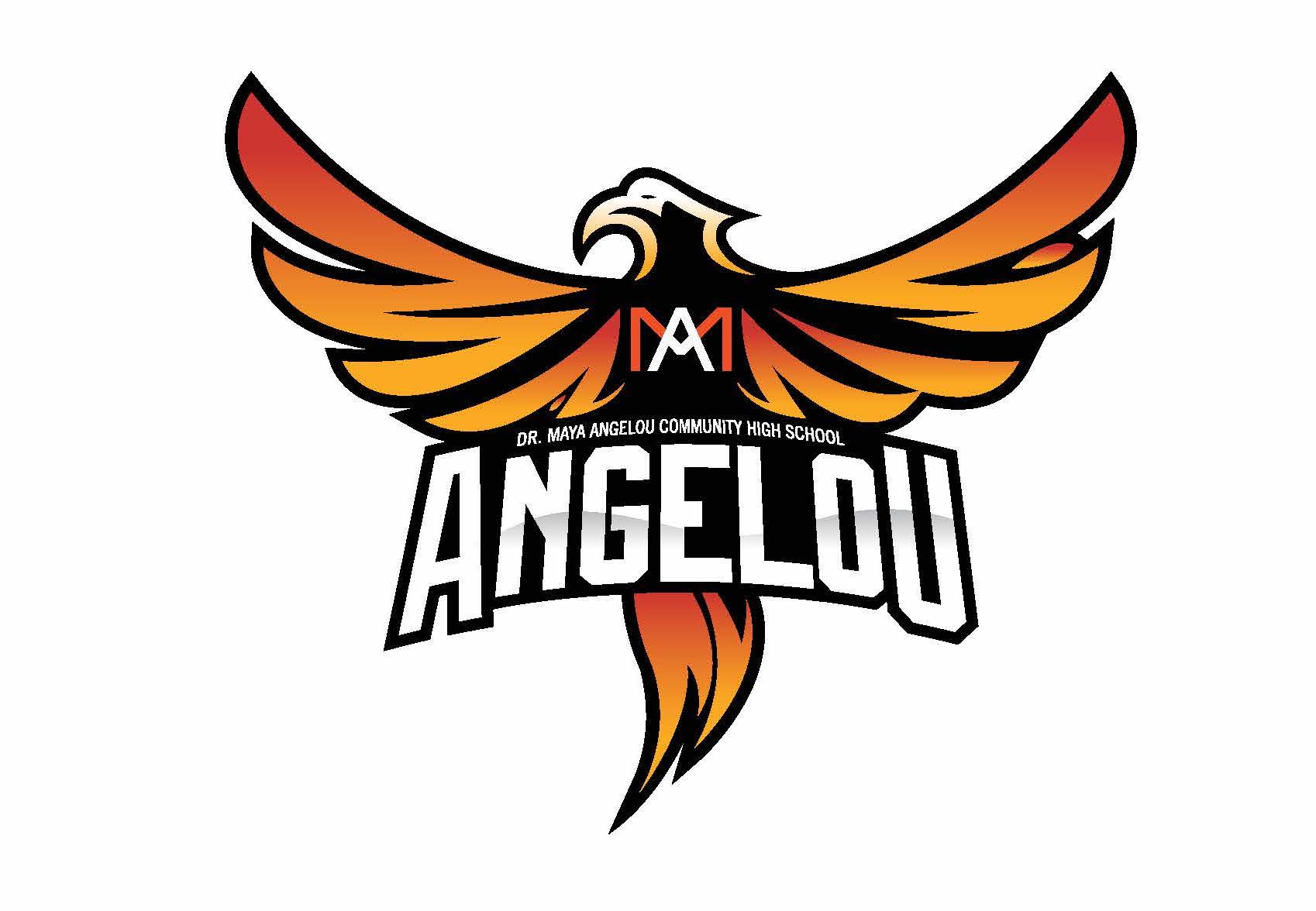 Branded Arts is excited to announce the Maya Angelou Mural Festival, the next installment of its LAUSD mural festival series. Over two-dozen local and international artists have been commissioned to paint a series of murals throughout South LA’s Dr. Maya Angelou Community High School, from May 13 – 18, 2019. Throughout the week, the school will also host an academic symposium, featuring programming by NASA JPL, LACMA, Artsy, Self Help Graphics, Eddie Huang, Darryl McDaniels of Run-DMC, and many more. The Grand Reception will be held Saturday, May 18th from 4pm – 9pm, featuring a conversation and performance with Grammy award-winning singer / songwriter MIGUEL, and a preliminary talk from Torri Shack of Tangible Movement. Dr. Maya Angelou Community High School is located at 300 E. 53rd St., Los Angeles, CA 90011.

This project was born out of a collaboration with LAUSD Local District Central staff under the guidance of Superintendent Roberto Antonio Martinez. It is the second in a series of mural festivals designed to transform school campuses into artistic canvases—a project that began in 2016 with a mural festival at Robert F. Kennedy Community School in Koreatown.

In a desire to promote arts in school, these projects also aim to send an inspirational and positive message to kids ranging from 9th to 12th grade. Not only will murals be painted throughout the week, but the school gymnasium will be transformed into a gallery exhibition space featuring work from over 50 artists, as well as artwork from the students. “Art was the most important subject I was ever exposed to as a student,” says Branded Arts founder Warren Brand. “A field-trip to LACMA when I was in school honestly changed the course of my entire life. These festivals are about sharing my love of art with the next generation, and giving kids the opportunity to be impacted like I was.”

For the Maya Angelou Mural Festival, Branded Arts has made an unparalleled effort to draw talent from both the local art community, as well as the pool of international superstars. LA-based stars like the all-female art collective Ni Santas, Raul Gonzalez, Victoria Cassinova, Enk One, Rob Hill, Brushwork, and more will be creating murals alongside legends like Shepard Fairey, Faith 47, Hugeart, and Rabi of Cyrcle, to name a few. Participating artists in the festival have been challenged to create murals that fit within the cultural landscape of the community and the ideals of Dr. Maya Angelou. “Our goal is for these murals to become permanent gifts to the community,” says Brand. “All artists will be required to submit concept designs for approval from the school’s administrators and LAUSD. Prior to offering artists locations on campus, we will be spending considerable time working to suggest the best locations to integrate their artistic voices with that of the community. We want to provide artists with context to create projects that will truly enrich the school for many years to come.”

The festival continues to facilitate the importance of art in educational systems, hosting student and public engagement projects throughout its week-long run. Students from both schools will be involved with mural production through workshops and seminars, along with participating in an academic symposium from May 15 – 17, 2019, that features a wide-array of presentations and workshops. Full schedule is below.

In addition, Branded Arts is happy to announce a special collaboration with Dr. Maya Angelou High School, NASA Jet Propulsion Laboratory, and Daniel Arsham Studio. Through combining scientific revelry, creative curiosity, and community spirit, Branded Arts will host a special poster contest that invites students to create artwork that both informs and educates. Students participating in this special contest will have a chance to win a signed book by Daniel Arsham and special NASA gear.

Branded Arts is a Los Angeles based organization that offers a full spectrum of artistic services for communities and corporate settings alike. Over the last 9 years, they have produced over 400 public and private mural projects around the world.

Guided mural tours will start at 4pm each day. Meeting location will be outside of the MPR

Inspired by the words of Dr. Maya Angelou and the imagery of painter and printmaker Charles White, students in this workshop will examine how art can be an effective tool in promoting social change. They will learn techniques in drawing and printmaking and create hand-printed postcard designs that reflect issues that are passionate about in their own lives and communities. As an element of the art, the students will be encouraged to consider the recipient of their postcards and the roles and relationships that exist between writer and reader, artist and viewer.

In this workshop, participants will discuss the significance of addressing social justice issues in their art. By introducing a Dr. Maya Angelou’s poem “Still I Rise” and Mark Bradford’s painting “150 Portrait Tone” as examples, students will discuss how artists can use themes about social justice to create awareness.

“In the Artsy Kids workshop, families will create a diptych painting allowing for a creative bonding experience through art. The instructor will guide participants through a step-by-step painting. We will learn painting techniques while still having creative freedom to select individual colors or make changes to the piece. Families will need to work as a team to bring their art pieces to life. No painting experience is necessary. You’ll be surprised at what you’re able to create!”

Self Help Graphics artists can facilitate a printmaking workshop, in which participants will create stencils

that can be centered around a specific theme. The stencils will be silk screened onto posters that

Satie Gossett currently teaches video production at Maya Angelou Community High School. Satie is a Los Angeles based writer, director and producer. He is best known for the comedic short film, “Jewtholic,” a religious comedy narrated by his father, Louis Gossett, Jr. Satie also directed “Departure,” a short film, which was featured at the MacWorld Conference in San Francisco. The film shot exclusively with an iPhone 4S screened at the Cannes Film Festival along with another short film, 10 Minutes starring Glenn Plummer and Kent Faulcon. Satie completed his latest short film, Forgiveness with Films With a Purpose that screened at the Congressional Black Caucus and won awards at the October Film Festival and the Malibu Film Festival.

Avriel is a Ph.D. candidate and Presidential Scholar at the Harvard Graduate School of Arts and Sciences. As a scholar, she has garnered numerous awards and honors including an invitation from the U.S. Department of Education to present her work for Congress in Washington D.C. and recognition as part of the top 10% of undergraduate social scientists in the world. Her work on algorithmic bias and music streaming compliments her foray into music making, where she took on the stage name King Avriel. Today, her research, in partnership with organizations such as Spotify and Data4BlackLives, focuses on the intersection of algorithmic bias, online recommendation systems, and racial identity development.

What does it mean to come of age in an inequitable educational environment? Avriel will discuss her own path from LAUSD schools to community college to a Ph.D. at Harvard, while remarking on the lessons she’s learned along the way about the role we each play in transforming oppressive educational policies and institutions while simultaneously navigating them.

We’re talking “Husslenomics!” Co-hosted by financial advisor Kyler Franklin and brand-strategist Peri Chantelle, join us as we celebrate & learn from the life of Nipsey Hussle Tha Great. This will be a space for cultivating knowledge & empowerment through tech, culture & financial literacy. Special guests to be announced!

Since Roland Wiley founded RAW International over 30 years ago, his firm has successfully executed a wide variety of projects, from transit-oriented developments and college campus master plans to private/public sector workplaces and maintenance facilities. Committed to the cultural preservation and sustainable revitalization of underserved urban communities, Roland advocates for regional transit investment as a catalyst for economic development. He is a licensed architect and a member of the AIA.

American painter Rob Hill based in Los Angeles is best known for applying his aesthetic to an array of surfaces including denim, leather, wood, glass, marble, silk and metal. The principal theme of his work is unity through expression represented by an intersection of color, texture and line. Rob’s affinity for geometric patterning can be linked to ancient Egyptian design and mid-century abstraction, including artists such as Frank Stella.

Vanessa Rivera is a Los Angeles based artist with an education in Fine Arts from the University of Southern California. Rivera’s work is an ongoing investigation into emotions created through the human experience. Rivera’s work is a mixture of abstract expressionism and figurative painting. The viewer is welcomed to enter a dream-like world surrounded by clouds of color, directing the viewer away from the physical world and into a self-created narrative.

Darryl McDaniels or “DMC” as most of the world knows him, first made his start in the music business as one third of the groundbreaking rap group Run-DMC and quickly became the most popular in terms of fans and influence. He has been in the public eye for the past 20 years, since forming the now legendary, defunct group, RUN-D.M.C with Joseph (Rev. Run) Simmons and the late, great Jason (Jam Master Jay) Mizell. Also one of the founding members of this multi-platinum music group, selling over 30 million singles and albums worldwide, it would be hard to overstate his influence on popular culture. He helped transform Rap and Hip Hop into the most popular music in the world, while building a fan base that rivals the biggest acts in Rock ‘n’ Roll. As the first and greatest of Hip Hop’s superstars, Run-DMC succeeded beyond anyone’s wildest dreams – their own included – by embodying for the world endlessly creative subculture of young black New York.

KITH is a retail store based in NYC, founded by sneaker designer, Ronnie Fieg in 2010. It currently has four New York locations in Manhattan and Brooklyn, Miami, and Los Angeles, as well as an online store. KITH sells a range of its own apparel alongside footwear collaborations, as well as a number of renowned streetwear brands. Many of Fieg’s sneaker collaborations bearing the KITH name have proved popular, leading to recurring sneaker collaborations with the likes of Adidas, Nike, PUMA, ASICS, New Balance and more.

6:30 – 7:30 – Miguel – A special conversation and performance with Grammy award-winning singer/songwriter MIGUEL on mental health through Art and Meditation. Introduction by Torri Shack from Tangible Movement

Grammy Award winning recording artist Miguel first hit the mainstream in 2010 with the infectious first single ‘All I Want Is You,’ from his major label debut album of the same name, a song which blended a stark hip-hop beat with Miguel’s creamy vocals to form a sound that was absent from the radio and established Miguel as one of the most unique and soulful voices in modern R&B. The album also features ‘Sure Thing,’ which hit #1 on Billboard’s Hip-Hop/R&B chart and second US #1 ‘Quickie.’ Miguel’s follow up was his critically-acclaimed, four-time Grammy Award nominated, sophomore album ‘Kaleidoscope Dream,’ which features his third US #1 hit single ‘Adorn,’ the intoxicating ‘How Many Drinks?’, ‘Do You…’ and ‘The Thrill.’ In 2013 Miguel was nominated for a total of 5 Grammy Awards. Lead single ‘Adorn,’ written and produced by Miguel, garnered Miguel his first Grammy Award for Best R&B Song and resided at #1 on the R&B/Hip-Hip Airplay chart for more than 23 weeks becoming the longest running #1 in the history of the Billboard R&B/Hip-Hip Airplay chart.